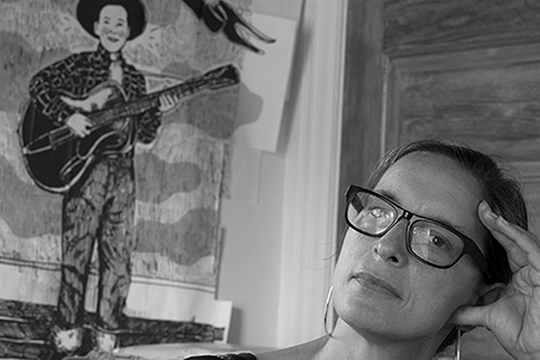 I drove across the Bear Mountain Bridge worrying that Summer will have forgotten I was coming to take her photograph and my wife Caroline would once again be right—always confirm appointments that are made well in advance. I was brought up to make and keep appointments, come what may, but that was in the days before people were busy.

Summer Pierre is the cartoonist, illustrator, writer, and teacher who lives across the river from us and who also runs book clubs at Split Rock Books in Cold Spring.

After hearing the announcement from the Google map navigator that "your destination is on your left," I walked through an iron gate and before I had reached the front door it opened and Summer stood there with a welcoming smile. She introduced me to her husband, a tall, broad shouldered man who teaches philosophy up the road at West Point Military Academy, but who is not in the army.

Summer took me up stairs to her studio at the back of the house. She sat down in her chair and we chatted about
San Francisco where she is from. She had a calm way about her. I asked her about the drawing on the wall behind her.

"The drawing is based on an old found image of a boy and his guitar from the 1940's that was entitled "Little King." I have no idea who this boy was, or where he performed, but evidently was a musician with the stage name Little King. I am very drawn to the vernacular and in particular, vintage images of unknown musicians."

"They have a beauty and a spirit that seems palpable. Music is very important to me and I like imagining the songs that these musicians played. Little King probably played a handful of upbeat country tunes like Hank Williams or maybe even Bob Willis. You can see it in his face--he's ready to give the folks a good time."

I started this blog in December 2008. At the time I did not know if I would enjoy it or not, and whether I would get any response to it. I am enjoying it and people have responded. I made a silent pledge at the outset not to say much about my artistic intentions or the composition of the photograph. I would just talk about what led up to taking the picture and what it was like doing it.

The discipline is actually not a strain for me, because I do not desire, and really have never been capable of discussing my intentions, artistic or otherwise. My wanting to take a photograph appears as fast as a bolt and without warning when I spot the subject. I then take it or not, depending on how brave, awake, or fumbling I am with the camera. I enjoy exploring, looking for things that stop me, or frighten me. To fear to take a picture usually means you want to take it.

Each month I send out a newsletter about the photographs I have posted in my journal. Sometimes I add a few personal notes.

Born in England in 1932, I started out as a properly brought up young gentleman with an English mother and White Russian father. He fought wars all his adult life and died in a car accident in the North of England at the age of forty-seven.

Photography came to me at aged eleven, photographing birds at the bird feeder my mother put up outside the kitchen window. After the acute disappointment of the birds being minute specs in the picture, I did cows in the fields around us in Kent.

After the wine trade, Lloyd’s, racing cars, selling cars and flying aeroplanes to Australia, I became a photographer. I photographed my friend’s engagements and their weddings. I worked for magazines and advertising agencies.

I was sent to Los Angeles to photograph Mick Jagger, returned to England via New York where I met Salvador Dali in the elevator at the St. Regis Hotel. Thence started my interest in living here. Three or four years later I moved to America, remarried and lived happily ever after.